Patricia Prince is described by attorneys who have used her mediation services as "brilliant and very tenacious in a tough, contentious, multi-party situation," "prepared, professional, flexible, personable and easy to work with" and "an extremely quick study and a very skilled communicator...Patricia [is] on my list of the five most effective mediators in the Bay Area." 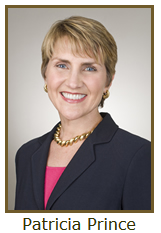 Ms. Prince is an energetic and tenacious mediator who gets to the root of the dispute.  She uses her extensive legal expertise, strong negotiating abilities and personable demeanor to help parties craft realistic and enduring agreements.  Ms. Prince creates a professional, yet empathetic, atmosphere through a combination of her legal knowledge, thorough preparation and ability to grasp issues quickly.  She is a highly effective communicator who injects flexibility, innovation and creativity into the resolution of disputes.

Patricia Prince brings extensive and valuable experience as both a mediator and a civil litigator to the dispute resolution process. Ms. Prince has provided dispute resolution services for well over a decade, successfully resolving hundreds of mediated disputes in the areas of:

In addition to her experience as a mediator, Patricia Prince was a civil litigator for 15 years.  Prince Law & Mediation began as a general civil litigation practice in 1999.  Mediation services were added in 2001 and the firm became a full–time alternative resolution dispute provider in 2007.  Prior to forming her own firm, Ms. Prince practiced complex civil litigation with the San Francisco law firm of Makoff Kinnear Counsel from 1993 through 1998, specializing in the areas of intellectual property, licensing, trademarks, securities, employment and general contract law for the investment, media, entertainment and high tech industries.  Clients included investment advisors, mutual funds, major entertainment studios, network television broadcast media, technology companies and other corporate entities.  Ms. Prince began her legal career in 1991, working for Feldman, Waldman and Kline, where she focused on securities, employment, franchise, commercial landlord/tenant, property and general contract law.  Ms. Prince has represented clients in both domestic and international disputes, and has practiced in both state and federal courts.

Patricia Prince is fluent in Spanish and has used her language skills throughout her legal and mediation career.  She began working with Spanish–speaking clients as a Student Lawyer (Fall 1990) for the University of San Francisco School of Law Refugee Clinic representing Central American refugees seeking political asylum and continued to use her language skills as an attorney in multinational business cases.  As a mediator, Patricia Prince is able to communicate directly with mono–lingual Spanish–speaking parties, building rapport and understanding that is more difficult, if not impossible, to attain through translators.

Ms. Prince also has significant experience in the field of business as an analyst and a sales and marketing executive with family–owned and start–up businesses for six years prior to attending law school.  Ms. Prince worked as a business analyst for Laventhol & Horwath, an accounting firm in San Francisco, where she performed market research and prepared feasibility studies.  Clients were hotel development and management companies seeking funding for development projects.  Prior to this, she worked as Director of Sales and Marketing for the Stein Eriksen Lodge, a luxury resort hotel located mid–mountain at the exclusive Deer Valley Resort in Park City, Utah, and then as Vice President–Marketing for a hotel development and management company.

Ms. Prince received her Bachelor of Arts degree from Stanford University in 1981 and her Juris Doctor degree from the University of San Francisco School of Law in 1991. Ms. Prince is fluent in Spanish and conversant in French.

Ms. Prince frequently is asked to participate as a guest trainer and mediation coach by trainers throughout the Bay Area. She has appeared at mediation trainings for Stanford Law School, Berkeley School of Law, Hastings, University of San Francisco School of Law, San Francisco Human Services Agency, California Department of Fair Employment and Housing, and others.

Patricia Prince believes that ongoing exploration, evaluation and analysis of the practice of mediation are essential for a top tier mediator. As part of her professional development, Ms. Prince regularly participates in training seminars, professional practice groups and trade associations. Her mediation training has included:

Ms. Prince has been asked to appear as a speaker on a variety of mediation topics.  Recent speaking presentations and panel discussions include:

Patricia Prince is fluent in Spanish and conversant in French.